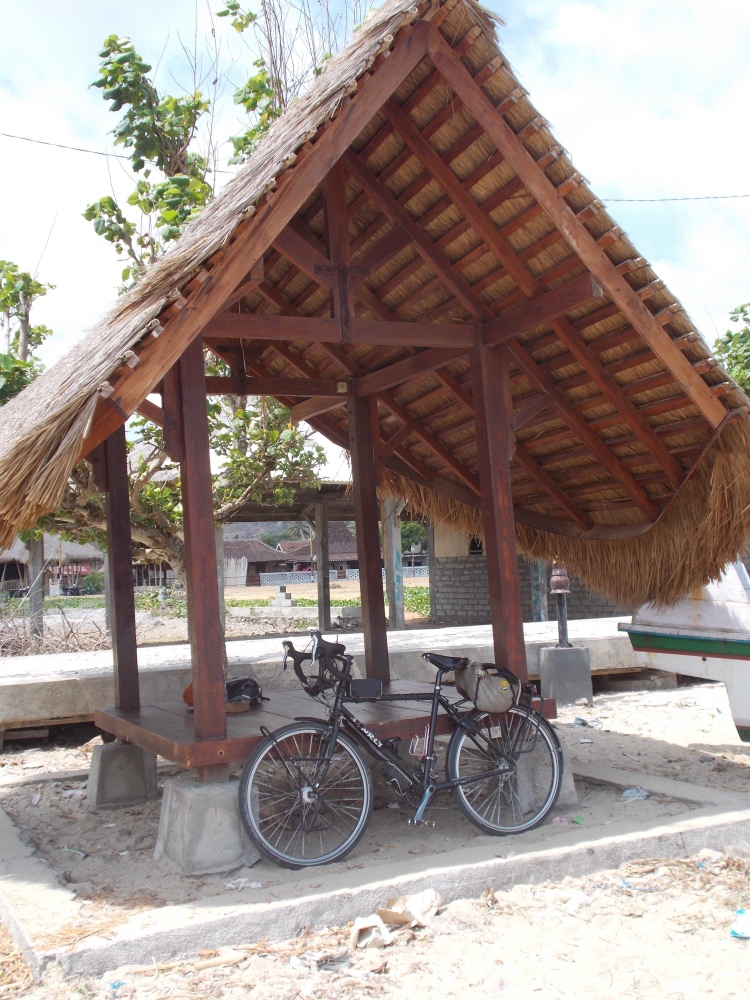 I flew from Bangkok, Thailand to Lombok, Indonesia mid-September which was about 6 weeks after Lombok had experienced really bad earthquakes in the north of the island. I had booked my flight weeks before the earthquakes which was why I was flying to Lombok. The south of the island had not been affected by the earthquake so I decided that Kuta in the south would be a good starting point. I didn’t really know much about Kuta, and it turned out to be well known for its surfing and very touristic. When I arrived, I actually thought that it must have been off season, as there were so few people there. I then found out that it was peak season but apparently a lot of the tourists had been put off by the earthquakes.

I ended up spending a whole month in Kuta, going down to the beach everyday, reading books and navel gazing. I had been struggling with really tender Achilles and so I thought that a month of resting and stretching might do the trick. 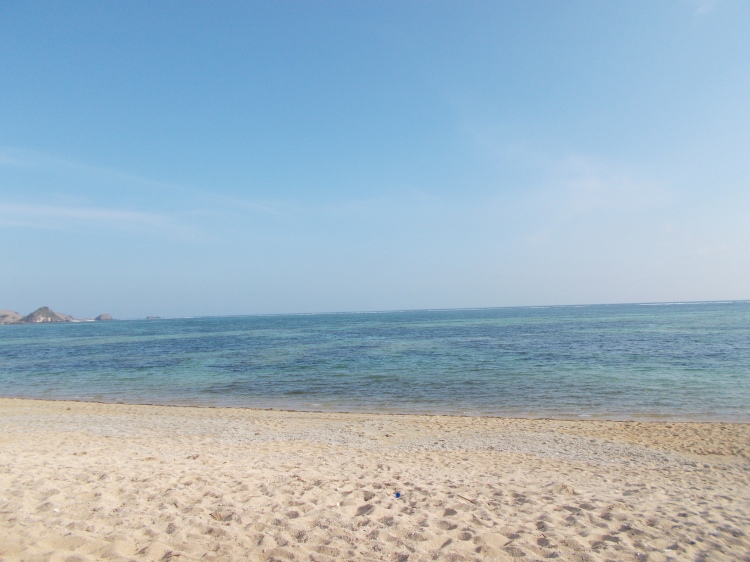 The beach was beautiful with very few people. 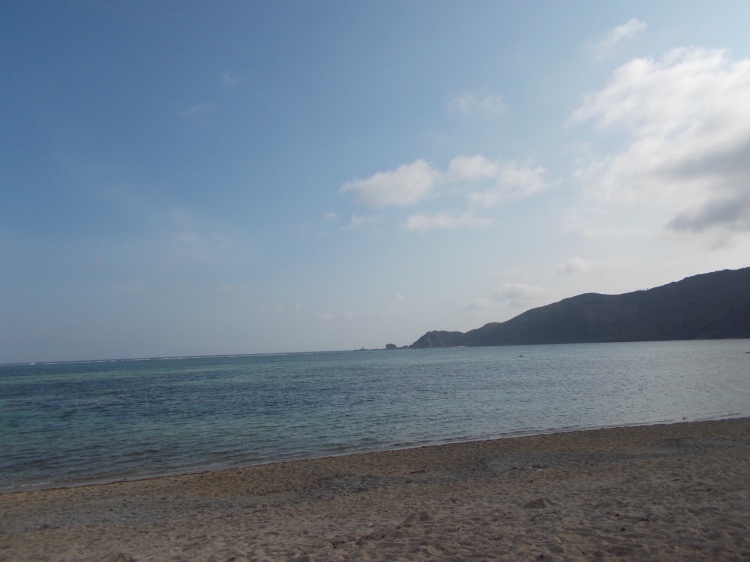 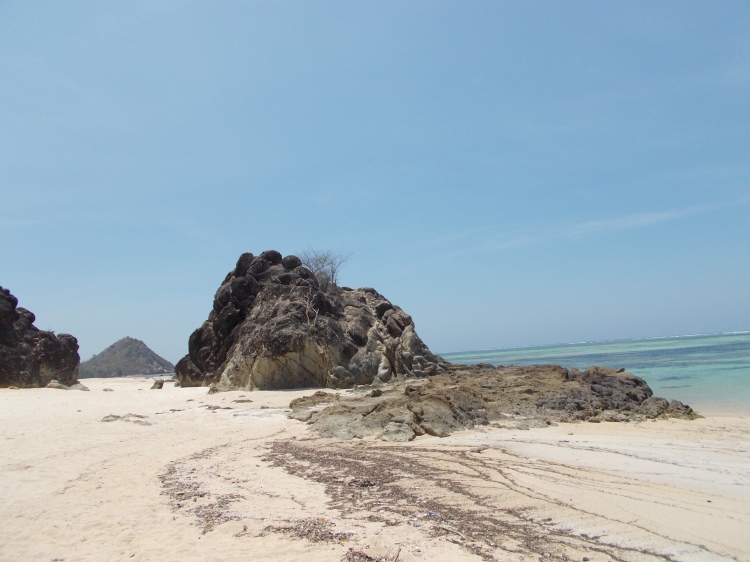 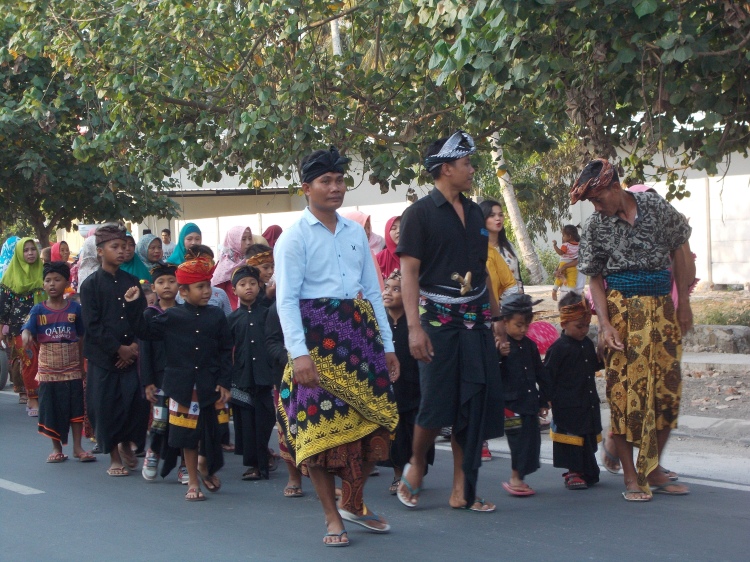 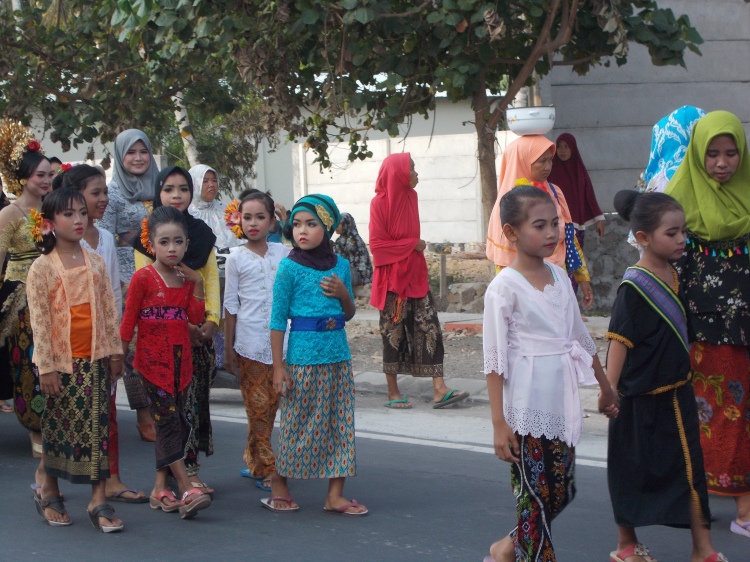 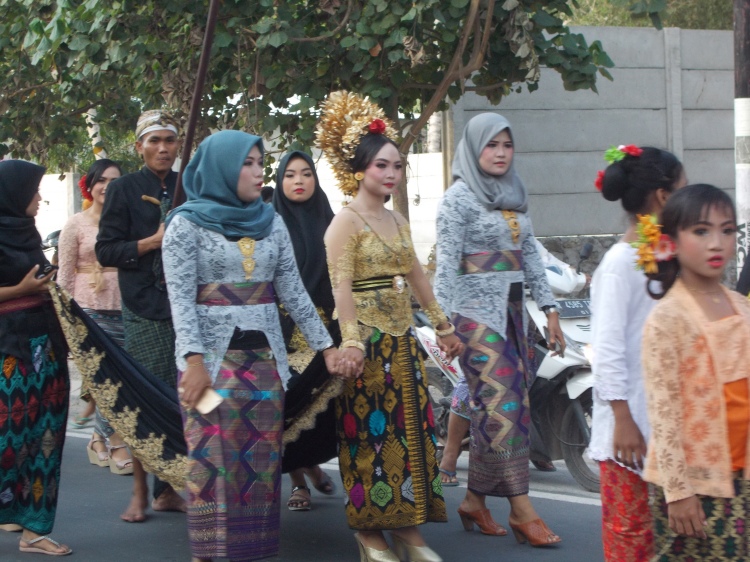 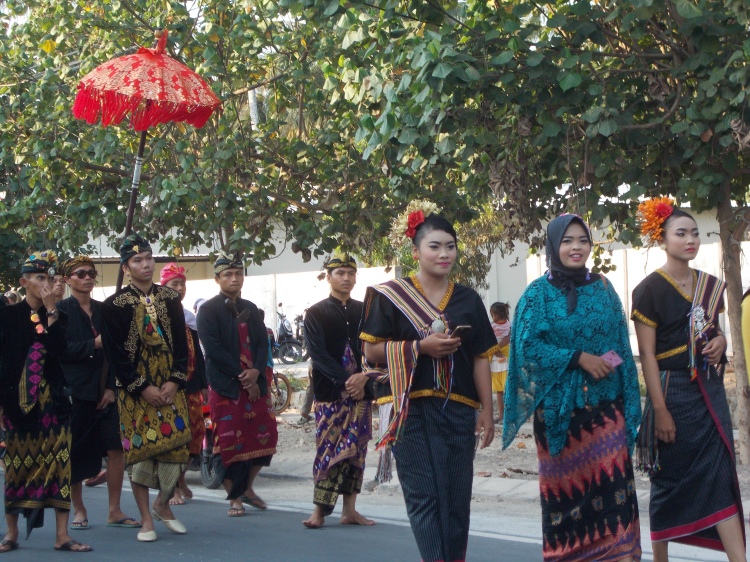 There were quite a few weddings whilst I was in Kuta. The Lombok tradition is for the wedding party to walk through the street.

What I loved about Indonesia was how people would always push in front of me when I was in the queue, it was so funny because it was so obvious, but I did always find that eye contact with a smile or a tap on the shoulder always resolved the problem. It was just so funny.

After a month of rest and a hot stone massage my Achilles were still uncomfortable and I thought that maybe physio might be what I needed. So I flew to Yogyakarta found a physiotherapist and spent three weeks in Yogyakarta. 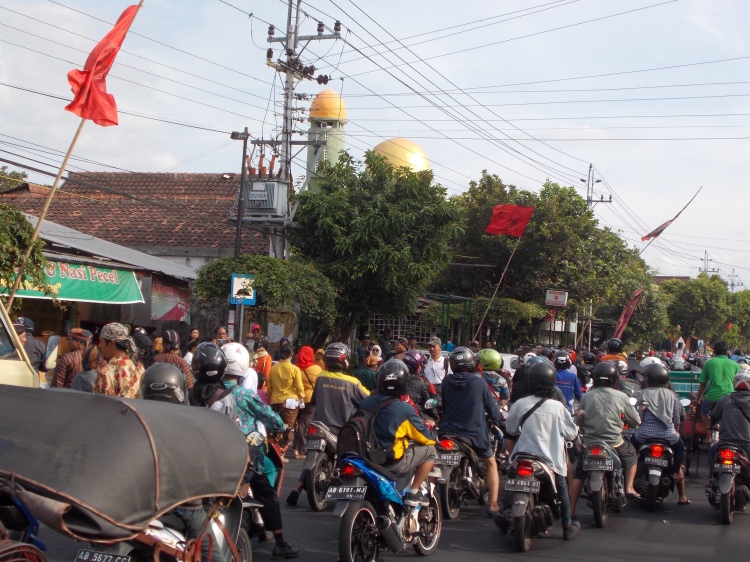 I went to see some traditional dancing at the palace.

And met some really nice people at the hostel.

Got taken around to different places.

Unfortunately the physio didn’t help but I did manage to ride to Candi Ijo which was an temple and was on the top of a very, very, very steep hill. It was nice to get out on my bike after such a long break. 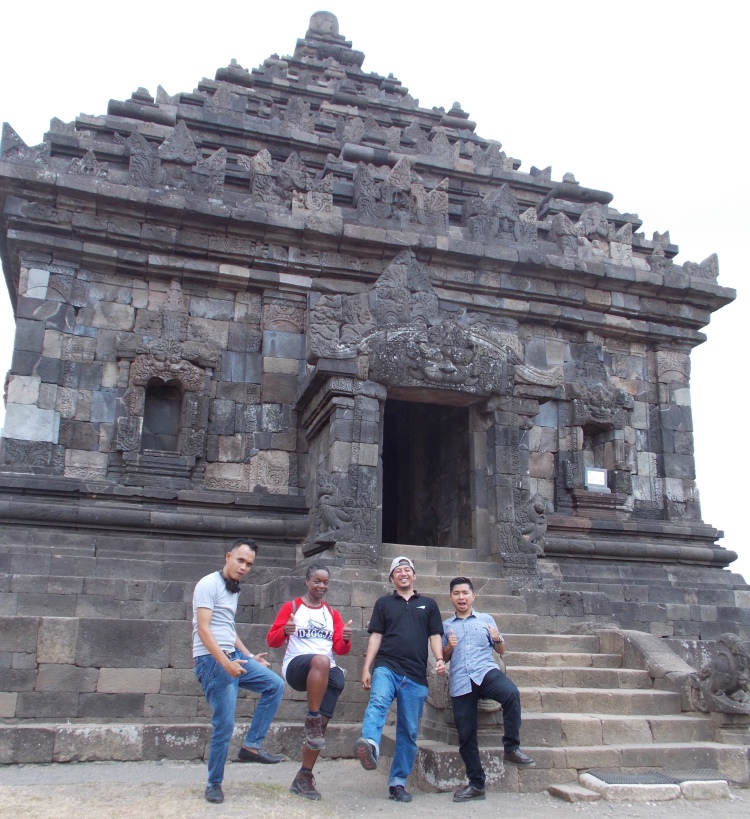 The people in the photo are random strangers who just wanted a photo with me. They were funny though, especially as I totally misunderstood them and at first I thought that they wanted me to take a photo of them.

I really did enjoy Indonesia and hopefully next time I’ll be able to cycle from Lombok to Yogyakarta rather than just carry my bike around with me. I met some really lovely people in Yogyakarta and I’ve been invited to visit West Sumatra by Arina in January 2019, so it will be great to see her again.

Arina has got a very magnetic personality, hence why everyone is so smiley in the above photo.

I got asked to model some clothes. Which I thought would be me standing against a white wall wearing a variety of different clothes. I didn’t expect to spend the afternoon imagining different scenarios and trying to project these scenarios by looking and acting a particular way. I need to ask more questions before I agree to things. 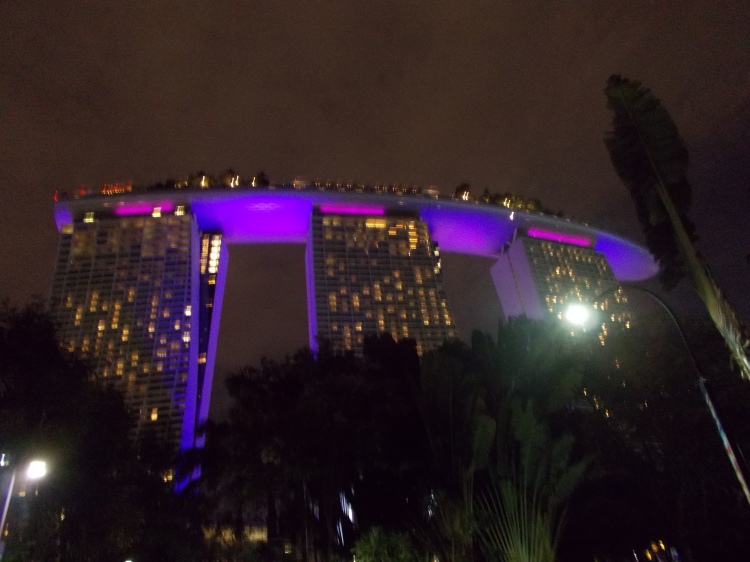 I flew to Singapore and spent 5 days there. I arrived during Deepavali, so had a look around Little India.

Whilst in Singapore I signed up to do a TEFL ( teaching English as a foreign language) course and paid internship in Chiang Mai, Thailand starting in April for 4 months. I’ve been looking at this course for ages. After visiting Indonesia I was really tempted to do a TEFL in Indonesia. Finally I decided to sign up for the course in Thailand. The course that I’ve found is only open to native English speakers and you have to be aged between 21 and 50, and this course only runs twice, so I decided to sign up sooner rather than later. After I signed up the upper age limit for the course was reduced to 45, so it’s good that I signed up when I did as I’m now no longer in that age range. The TEFL course will give me the opportunity to travel and teach English in a lot of different countries and by staying in a place for a while I get a chance to learn a lot more about the country.

After leaving Singapore I caught a bus with my bicycle to a city called Muar in Malaysia. 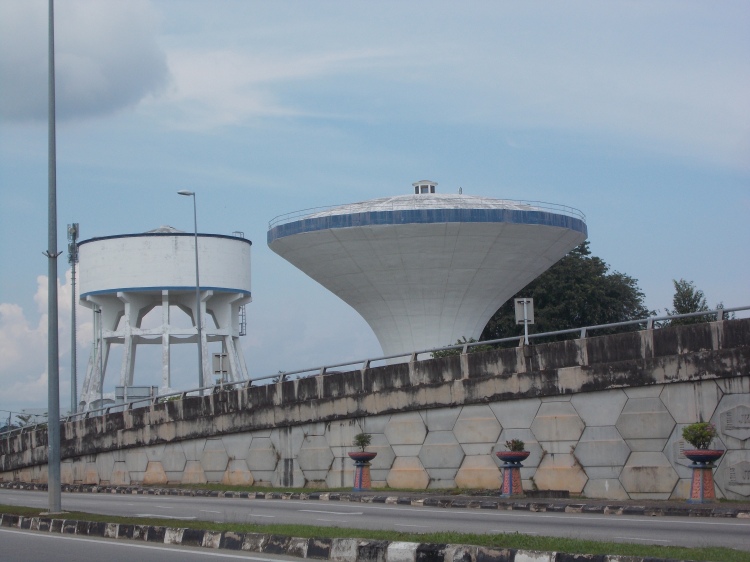 I stayed Muar the last time that I was in Malaysia and stayed one night. This time I stayed here for 7 weeks. I stayed at a really nice cycle friendly hostel. There’s just not much in Muar, I had hoped that there would be a cinema in the city, but unfortunately there’s not. It’s quite a large city with lots of industry but not much else. I stayed in Muar to wait for a friend from the UK to arrive in Kuala Lumpur for New Years and also it would give me a chance to find a physio and get my ankles sorted. I did find a physio and they were really surprised when I turned up, I was their first foreigner. Muar isn’t touristic at all, so people are very curious as to what I’m doing, where I’m going and where I’m from. And of course because it’s Malaysia people were very friendly.

The sultan of Johor has a home in Muar, so there are crowns around the place.

Muar is home to one of the largest wall murals in Malaysia. A lot of the murals around Malaysia are actually done by non-Malaysians, which is a bit of a shame. 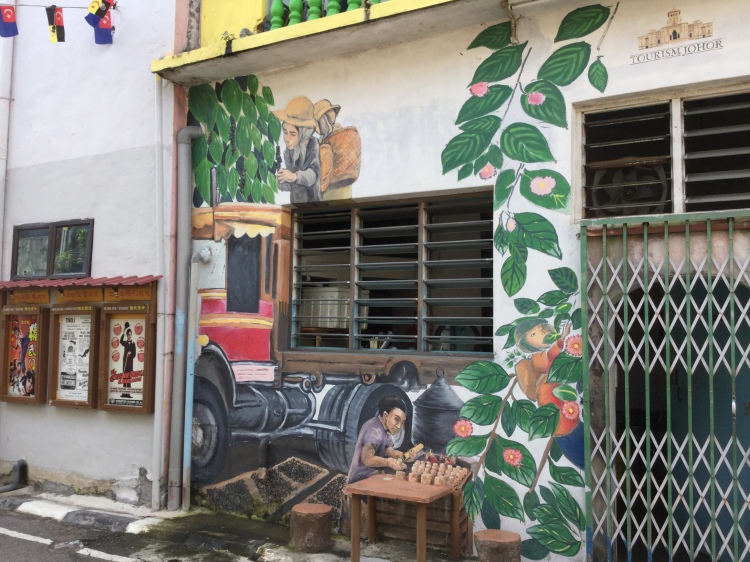 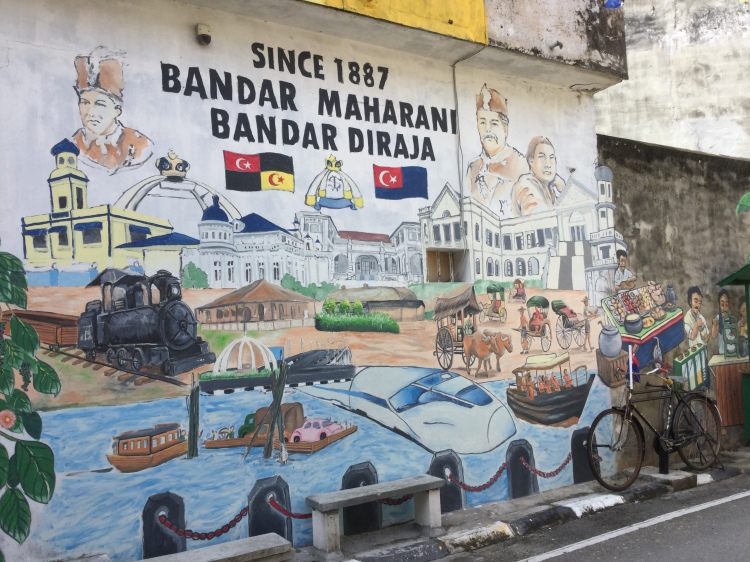 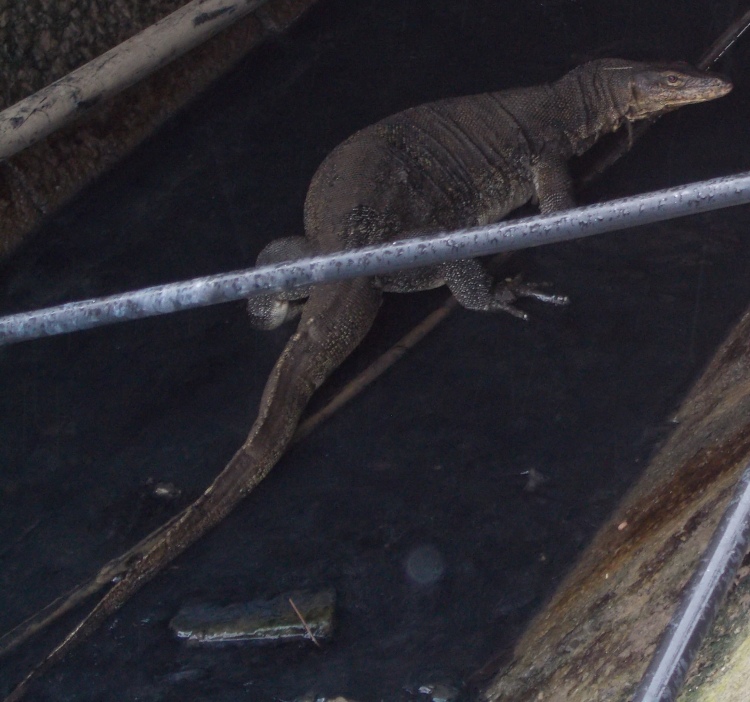 They have these massive reptiles walking around the drains. This was in the town centre. They are actually harmless and apparently more scared of me than I am of them but every-time I see one they make me jump. 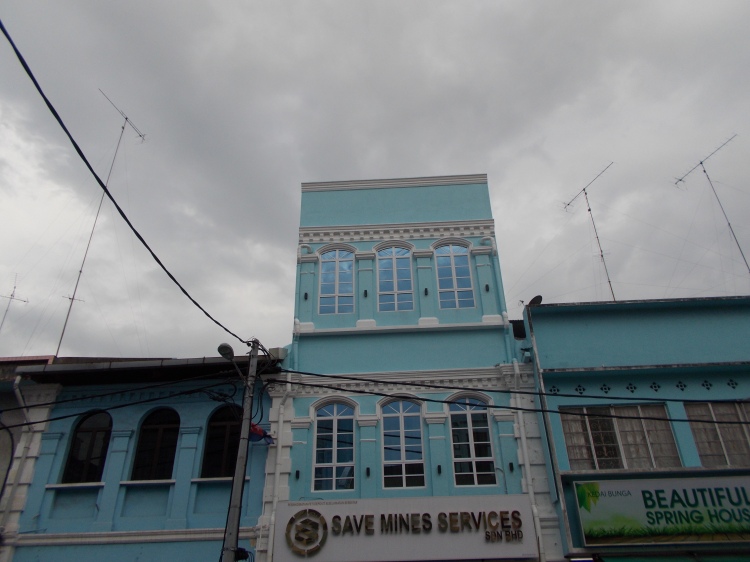 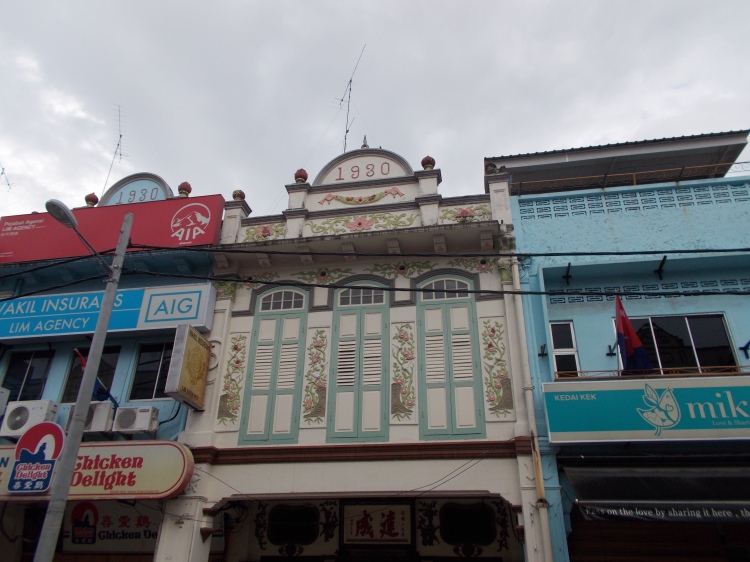 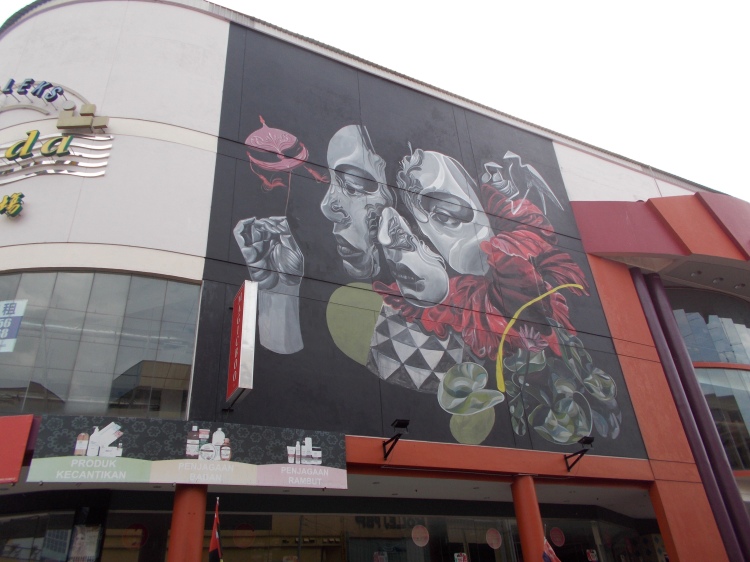 They do actually have some really interesting buildings around the city. As the city wasn’t touristic it had a range of small locally owned stores which were great. There were no large shopping malls. 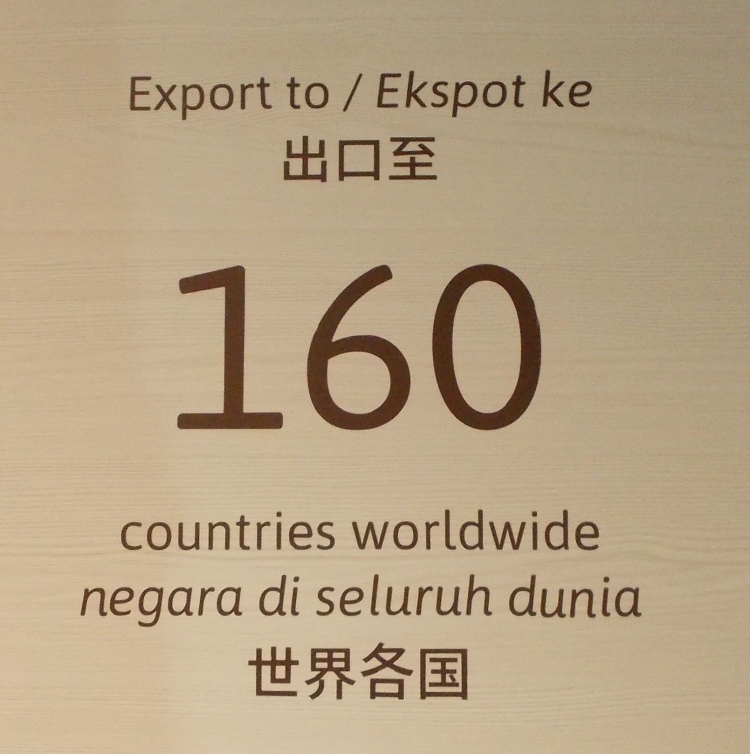 Muar is a major producer of furniture.

As it was a cycle friendly hostel I got to meet a few cyclists who stayed at the hostel. 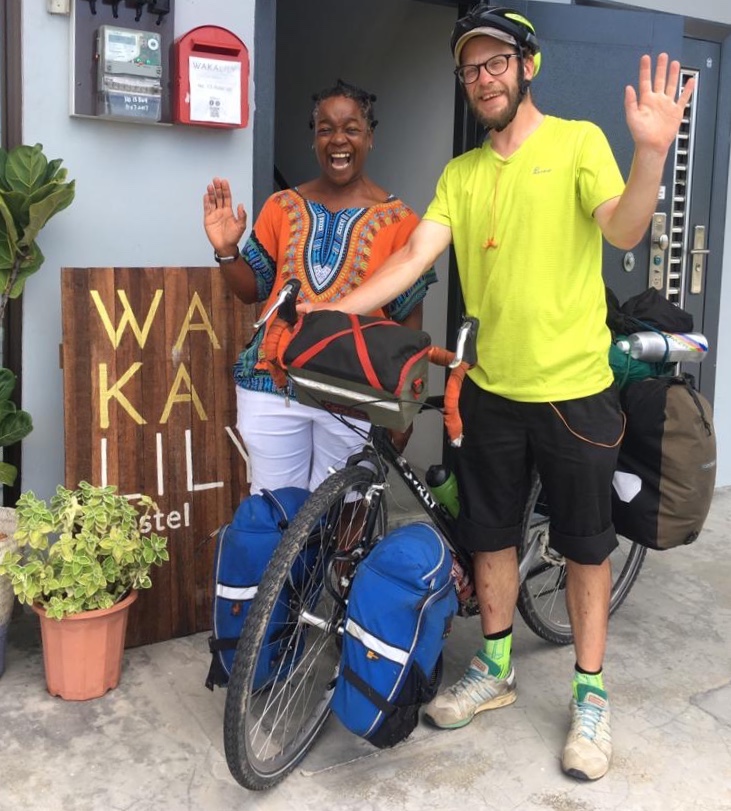 I spent Christmas in the hostel, which was great. We did pot luck, I was meant to be making Chocolate Chip Cookie but they ended up as badly burnt biscuits, which everybody genuinely really liked. Someone said it’s like the best rice in the pot is the burnt rice at the bottom that everyone fights over.

It was a really good dinner especially as everyone was so excited as they would never celebrate Christmas and they just loved the whole idea of celebrating it.

A few months ago Ayesha McGowan got in touch with me through Emily Chappell. I had read Ayesha’s website and read about the ‘ Quick Brown Foxes’ that she had interviewed in the past. So when Ayesha asked if she could interview me initially I didn’t realise that she had gone from written interviews to podcasts. I also didn’t realise that it was going to be a video calls – I hate video calls. Poor Ayesha was looking at the ceiling for most of the time whilst she was interviewing me as I placed my phone on the table and occasionally peered into it. So here’s the link to the podcast.

After 7 weeks of physio I’m back cycling. The ankles are doing really well. I now just have to build up my fitness and keep up with the exercises. She was a really good physiotherapist.