My first night was spent in Satun with a Warmshowers host and his family. My second night was spent 40k outside a city called Trang. My host was participating in a 10k run, he invited me to join him, so I walked the 4k fun run 🏃🏿‍♀️ 😊.

It was a big turn out. My next few days were spent in Trang with another Warmshowers host, Kim and his family. Staying at Kim’s house at the same time as me was another cyclist- Sin, he’s from South Korea, he was heading south whilst I was heading north.  Kim teaches English in a couple of local schools so he invited us along to speak to the students about our travels.

Sin cooked noodles on his camping stove and the students ate it all. It was a great experience to go to the school. 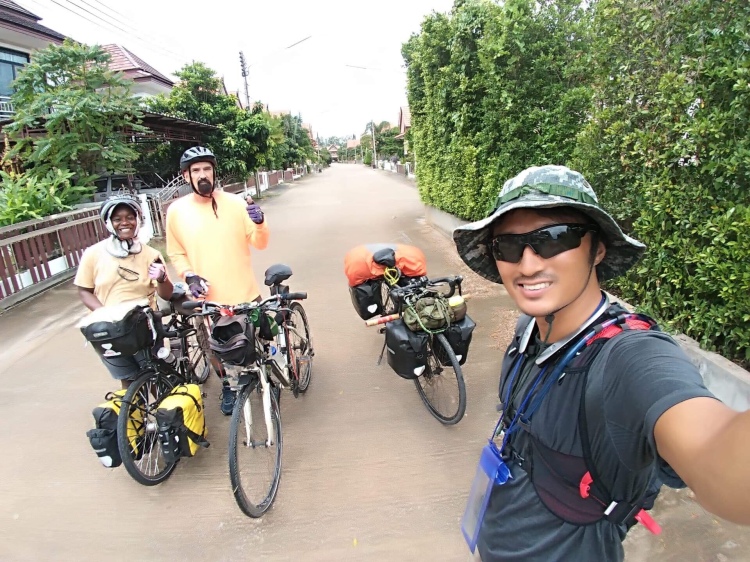 Myself, Kim and Sin.

I arrived in Thailand during its rainy season, the north of the country is quite wet so my plan was to get as far as Bangkok and return and visit the rest of the country some time early next year.  I was extremely lazy in Thailand and caught the train a lot, although this had proven quite stressful. The first time I caught the train the guards told me that they would put my bicycle on the train for me. Which was very kind of them, but it also meant that I didn’t know where my bicycle was when I got to the other end. Also different things happen at each station. Some stations help you with your bicycle others you have to do it yourself and so it’s been a bit difficult particularly due to communication. My picture dictionary has been a godsend and this is the first time on my trip that I have had to use it.

Although I haven’t cycled much I still have been chased by dogs. I’ve realised that either you out pedal them or you stop and get off your bike and that usually scares them. I recently got chased by a group of dogs in a Tescos car park, so I stopped, got off my bike, lost my balance and promptly fell over 🤣. It did work, they did run away 😊.

I got to a small seaside town called Prachuap Khiri Khan. Initially I had planned to spend a couple of nights there but I ended up staying over a week because I found an amazing masseuse who did wonders on my legs. The first time she just stood on me by the third time she was walking on me, although I did at one point during the session want to push her off my leg.  I also met another cyclist, Michael, from the US who’s riding a Surly Ogre, he’s lucky enough to have retired in his 50s. He has sold everything and is just travelling around the world forever really. Soon after meeting Michael we met Ziggy and his wife Porn who showed us the sights of the area and took us around in their saleng.

The topiary is amazing here in Thailand. It’s all over the place. 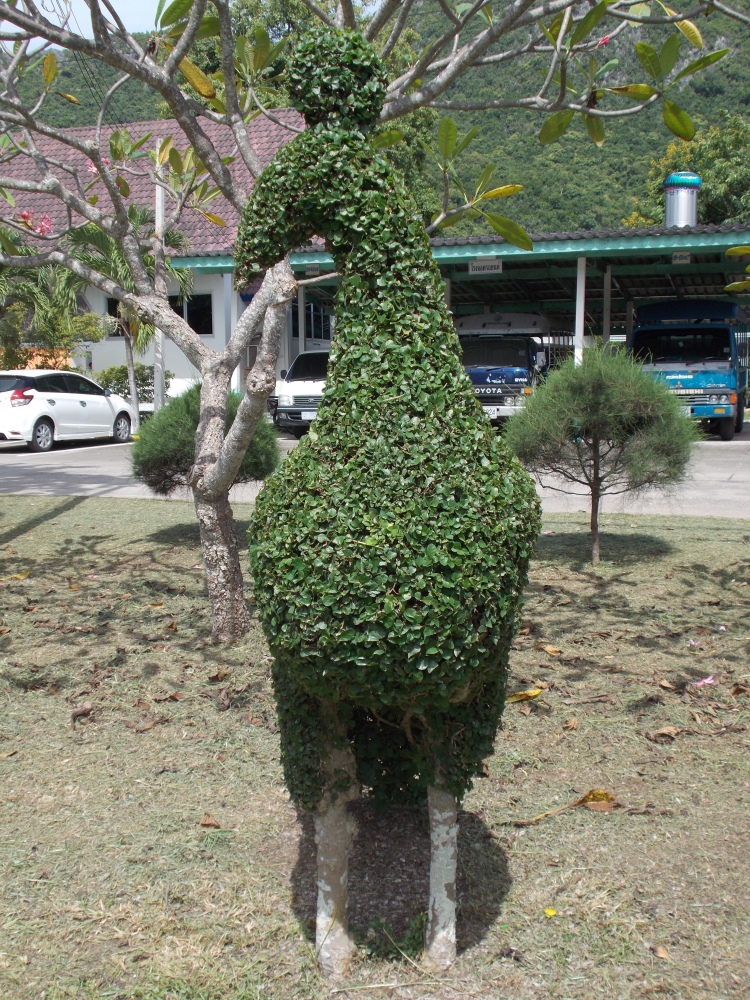 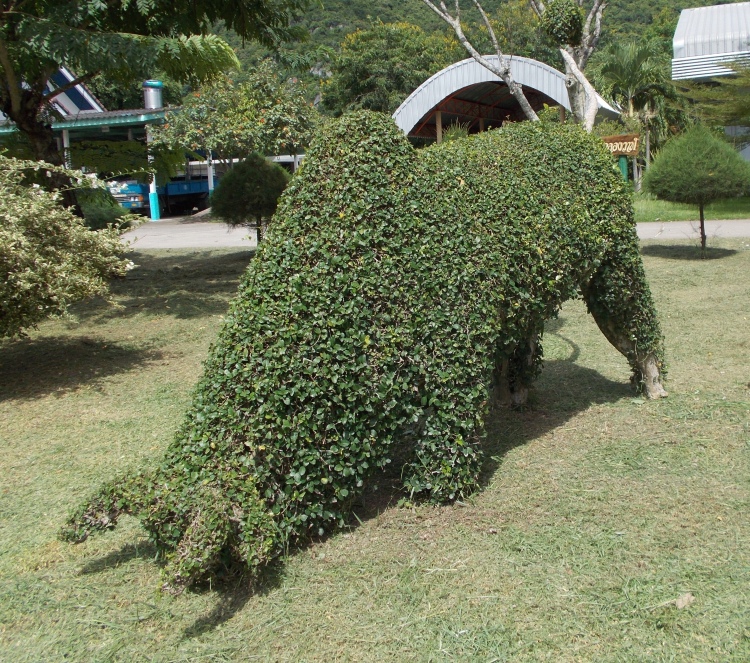 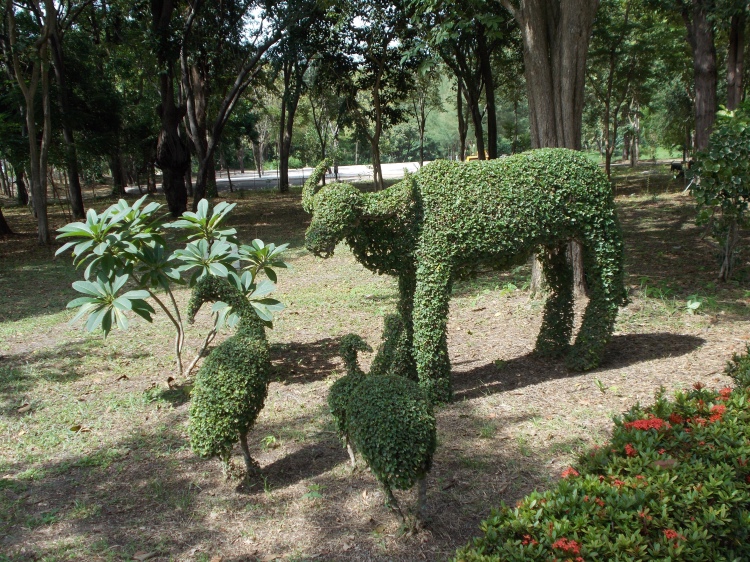 I love the way that some of the road signs are decorated.

The people here are really friendly. It’s known as the Land of Smiles and it is. Malaysia had a high ‘smile reciprocation rate’ but Thailand’s is even higher.

Prachuap Khiri Khan had two groups of monkeys in the town. There was the really mean group, and they were quite mean and scary:

Then the really gentle monkeys at the other end of the town. 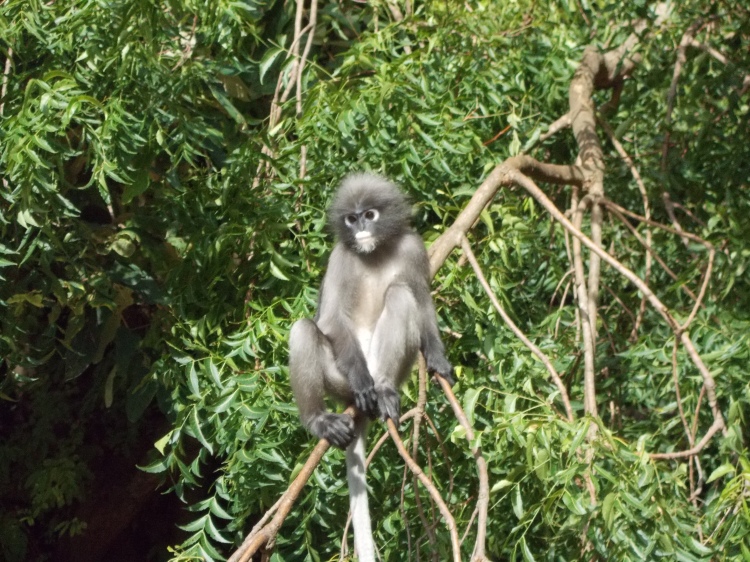 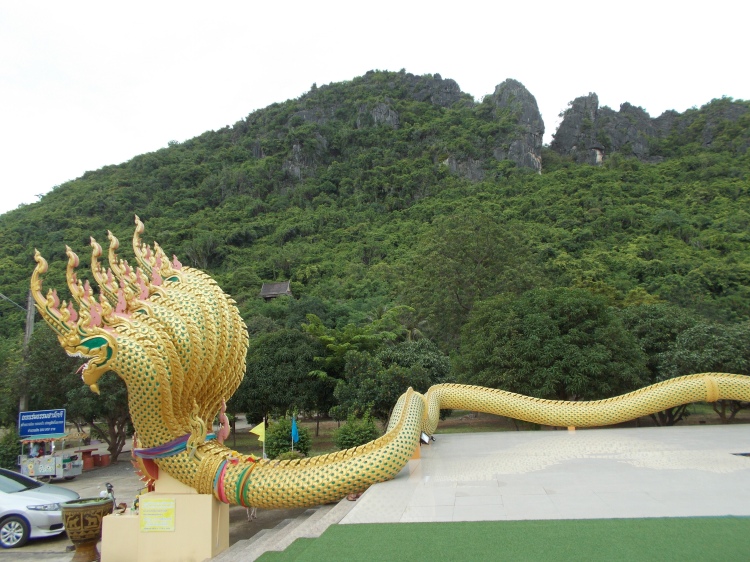 I’m now in Bangkok. I met up with Dave who I first met in Langkawi. Dave was now travelling with his son, Ricky. We ate grubs and Ricky let me try some of his scorpion. 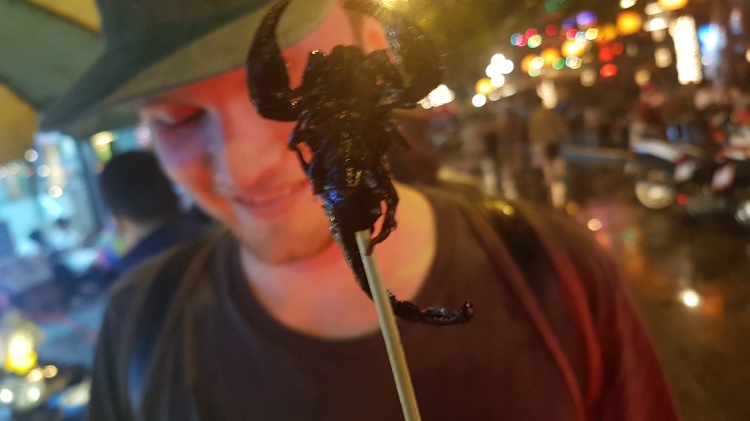 I’m now getting ready for my flight to Lombok, Indonesia. At the time of booking my ticket 10 weeks ago Lombok and the Gilli Islands were great places to go but since then it has had three earthquakes, so I will have to discover somewhere else in Indonesia. 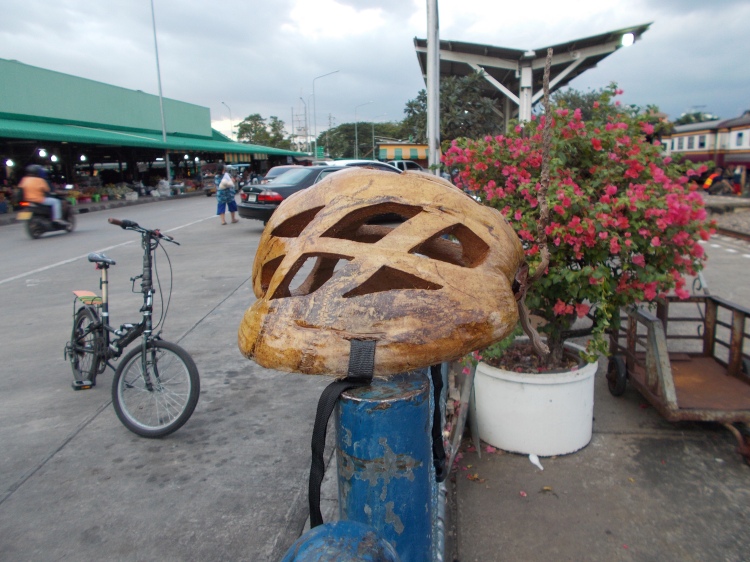 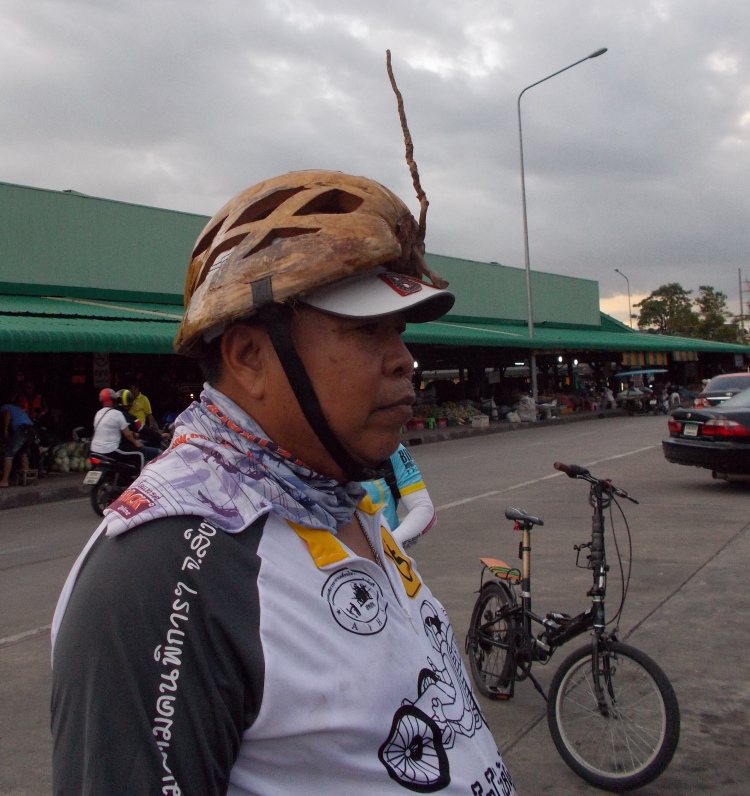 I love this chap’s coconut cycle helmet, I wonder how effective it is, hopefully he will never have to test its efficacy.

Everyone in Bangkok has heard of Leicester AND they all know how to say Leicester correctly. I’m amazed that Leicester City FC had an open top bus through the city because it’s just so congested. Whereas back home in Leicester LCFC had to have its parade through the streets on a Monday and not on the weekend because of numbers.