Leaving Cambodia and crossing the border into Thailand of course wasn’t straightforward, I ended up going back and forth between the two countries trying to find the departure office for Cambodia, I finally did find it.  Entering Thailand was okay, I really don’t like immigration and at the Thai border the immigration officer did come out of his booth and sit down with me to find out why I was entering the country, fortunately his questioning stopped when he found out that I was from Leicester and I was able to breath a sigh of relief especially as I was now in a country where people actually know how to say Leicester correctly.

I now had 150 miles to ride to get to Bangkok, and I had five days to do it in.  I had to get to Bangkok before Songkrahn festival (Thai New Year), when all of the shops are closed.  I had to get a box from a bike shop as I was going to fly from Bangkok to Chiang Mai.  Fortunately the roads from the Cambodian/Thai border to Bangkok were smooth and flat and so the cycling was easy, the hardest part was the heat with temperatures in the mid 40s deg C.

I arrived in Bangkok easily in 4 days where I stayed at Spinning Bear Hostel.  They’re a cycle friendly hostel with three fat cats.

I managed to get my cardboard box from Crazy Touring bicycle shop before it closed for Songkrahn.  They even helped me to strap it to my bicycle partly because they weren’t too keen on the way that I was going to tie it to my bike.  The shop had a pool table, coffee shop and cuddly dog;  I could have easily spent my whole day there.  The box that they gave me was smallest that I had used so far.  The box was for a folding folding bicycle, so it was a matter of a lot of dismantling of my bicycle, which I hate because putting it into the box is like a jigsaw puzzle and then reassembling it at the other end is a pain.  When I arrived in Chiang Mai, I just could not be bothered to put my bicycle back together at the airport so that I could ride to my hotel, so I caught a taxi to my hotel.  I then discovered that the touring bicycle shop across the road from where I was staying was the bicycle shop that had been recommended by Spinning Bear Hostel in Bangkok, so I dragged the boxed up bicycle across the road to be reassembled. 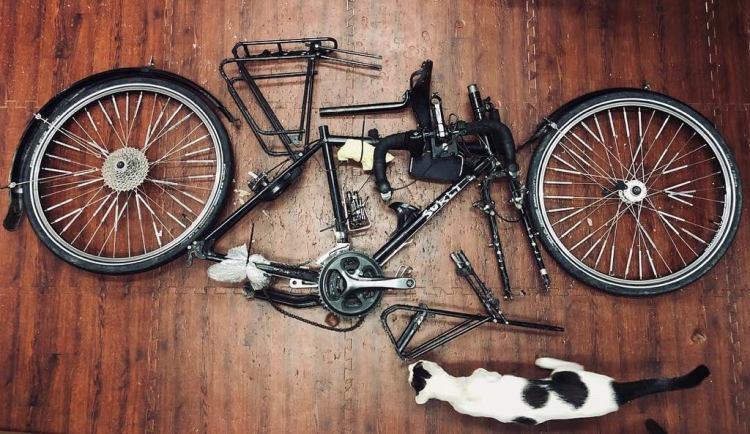 This was now my second time toThailand, the last time that I was here, I stayed for a month and I didn’t really do it justice as my last two weeks were spent moping around with a cold or should I say influenza.  This time my plan was to stay in Thailand a little bit longer as I had enrolled on a paid internship for a TEFL (teaching English as a foreign language) course in Chiang Mai, Thailand. The course involved two weeks in the TEFL school learning how to teach and then 4 months in an actual local school teaching, at the end of the four and a half months I will hopefully become a qualified TEFL teacher which  will enable me to teach English in many different parts of the world whilst I travel.

The first two weeks of the internship were extremely intense.  We did observed teaching practices in a summer school, where a lot of the students and teachers didn’t actually want to be there. We’ve been told that we have experienced the worst that we will experience; I do hope so.

In total there are eight of us on the internship, four from the US and four from the UK.  We’re now getting ready to go to our schools to teach for the next four months.  I’m off to a school in Kamphaeng Phet in central Thailand.